A chain grab is a simple and easy technique which can be used with many charcters in the game. It is one of the best ways to wrack up percent with some charcters, such as Falco.

A chain grab is just a throw, followed imediately by another throw etc. The most common example is Falcos down throw chain grab, which works on every charcter other than Jigglypuff very effectively. On most charcaters, it can give around 50% before the opponent will fly far enough to escape.

marth can escape falcos pretty easily too with up B

then whyd you say all characters except jiggy 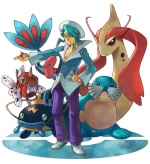 i hate chain grabbers! my friend does it when we play, it gets on my nerves

yea they can be cheap if done to much >_>

Made by Ben
Avatar also by Ben
King Wallace

Yup, that's the one that infuriates me

best is the ice climbers because its infinite

no the caveman rules
CTrainer